Reviews on some of the best antivirus software on the market. Find the excellent protection for your PC here.
Blog
295
Сlarity and Trust – We take pride in being the site where you can feel free to express your opinion and leave feedback. Whenever you click on the websites of products reviewed by us, we participate in the revenue sharing and get commissions that help us maintain our project. Read more about how we work. 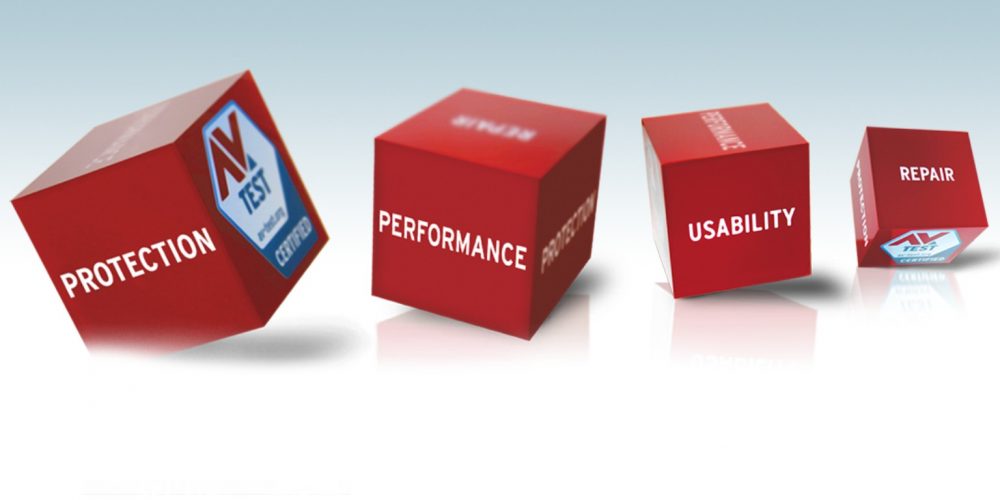 There are many different products for Windows 10 on the market. The German AV-Test laboratory once again wondered which antivirus copes best with protecting Windows 10 devices and tested 22 comprehensive antivirus solutions for Windows 10. As a result, 16 antiviruses received the TOP PRODUCT “.

This time rating was full of surprises.

In July-August 2020, the AV-Test laboratory tested 22 security programs for Windows 10.

“This round of testing is distinguished by an abundance of TOP PRODUCT ratings. The award will be granted only if the security product scores more than 17.5 points in testing”, – told in AV-Test.

In this test session, more than two thirds of the selected products received this rating from the laboratory. 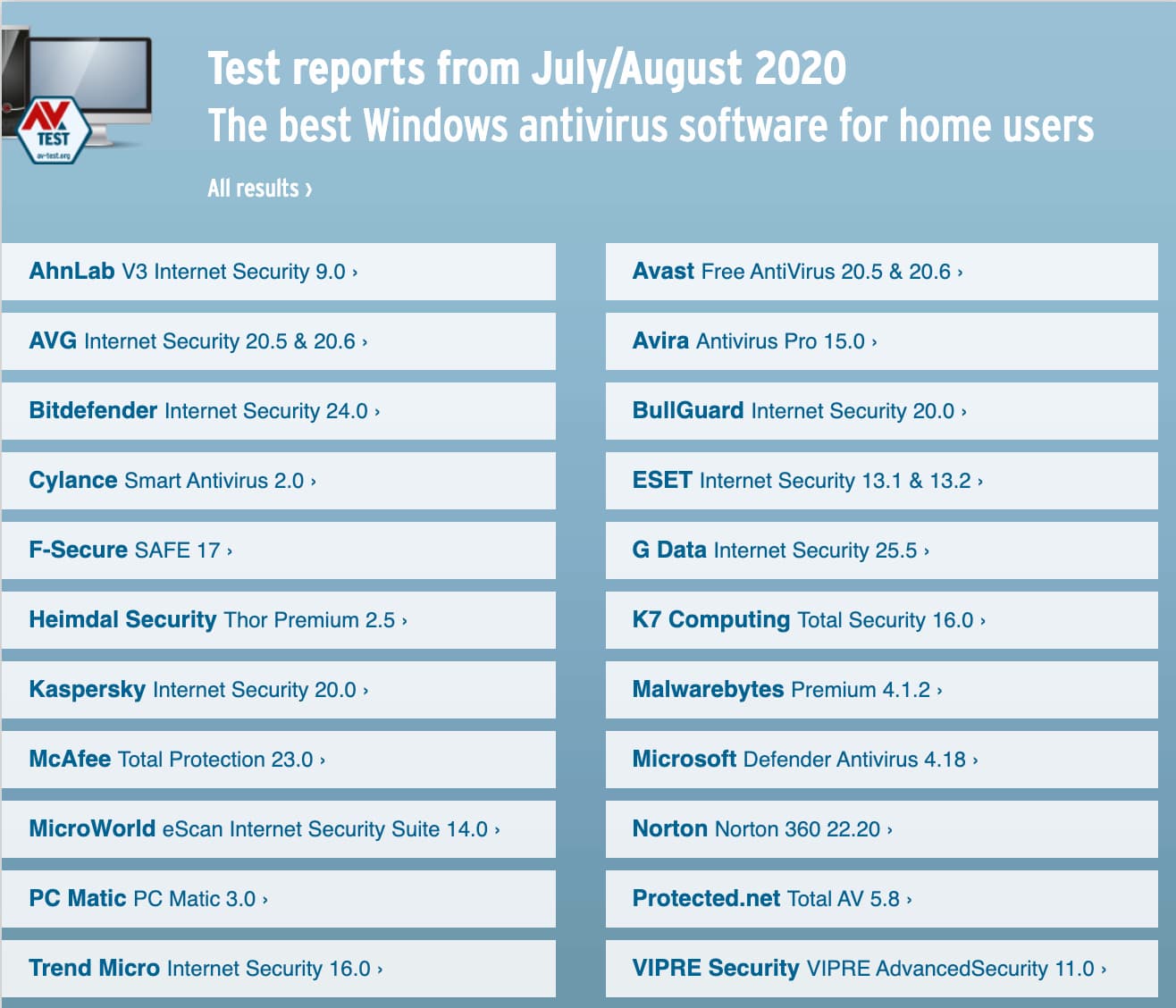 When users talk about antivirus protection for Windows, they no longer have the questions “Do you need antivirus?”. Instead, they are seek to know “Which antivirus offers the best protection?” The laboratory evaluates products for protection, performance and usability.

In each rating category, a product can receive up to 6 points. In this round of testing, 8 products were able to earn the maximum 18 points: these are solutions from AhnLab, Avira, F-Secure, G Data, Kaspersky, McAfee, Microsoft and NortonLifeLock.

All antiviruses that scored 17.5 or 18 points received not only the “Certified Security” rating, but also the “TOP PRODUCT” award. 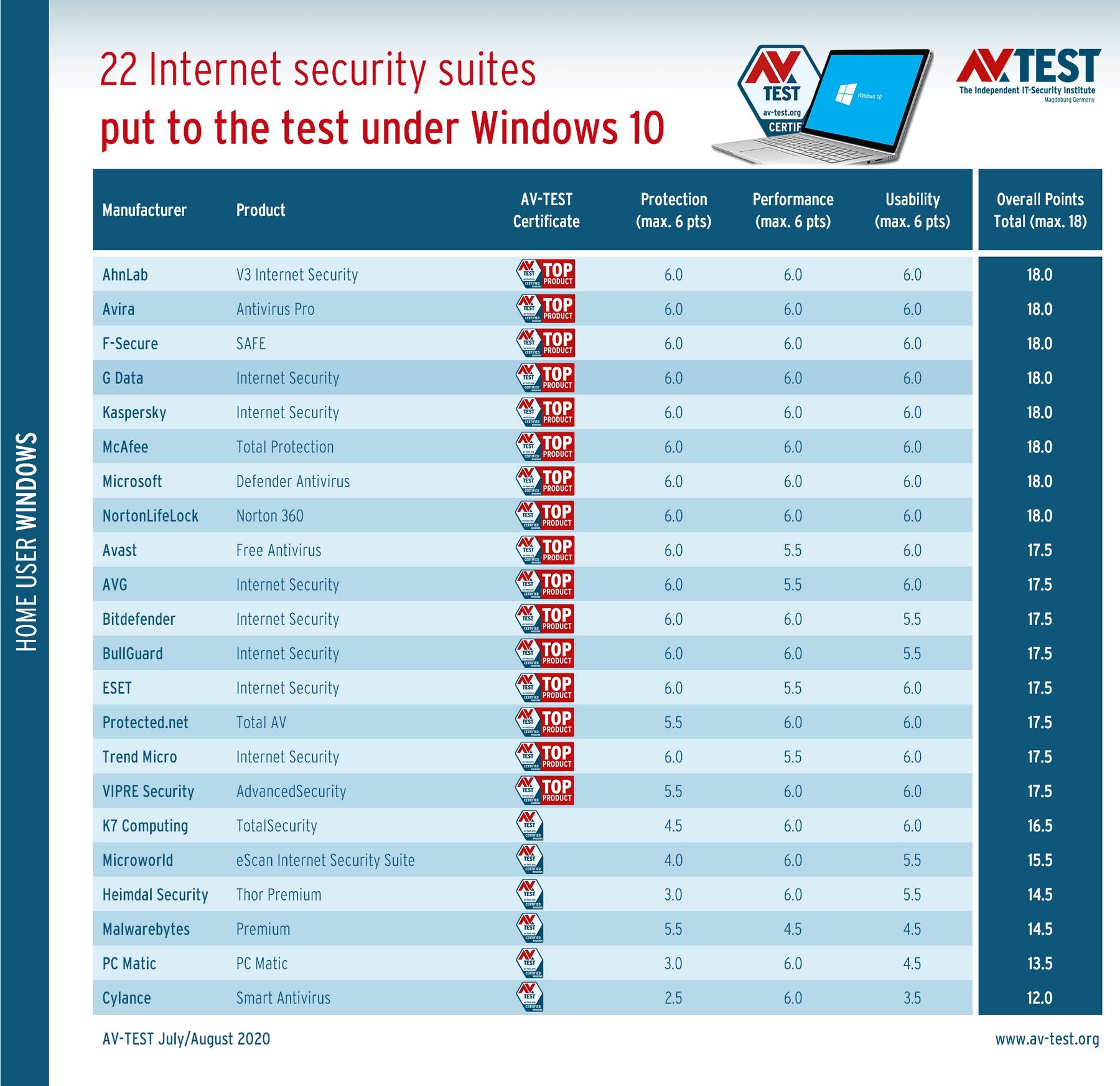 Antivirus for Windows 10: Products with a score of 17.5 to 18 are awarded the TOP PRODUCT title. This time, 16 out of 22 test participants received the award.

The lab uses the latest high-risk malware samples to test the defence of each product. To obtain the most relevant results, testing is repeated a month later. In a so-called real-world test, the lab uses zero-day threats collected from websites and email.

In a test involving known malware, AV-Test collects a compilation of web threats detected over the past two weeks. In total, the tested antiviruses need to counteract approximately 14,000 threats.

The pivot table lists the detection rates for each product. Products from Avast, AVG, Avira, Bitdefender, BullGuard, ESET, F-Secure, G Data, Kaspersky, McAfee, Microsoft, NortonLifeLock and Trend Micro have achieved 100% threat recognition. Solutions from AhnLab and Protected.net made small mistakes in only one of the four test segments.

The rest of the products failed to block attacks in one or two tests. Cylance and Heimdal Security are having serious problems detecting malware samples. 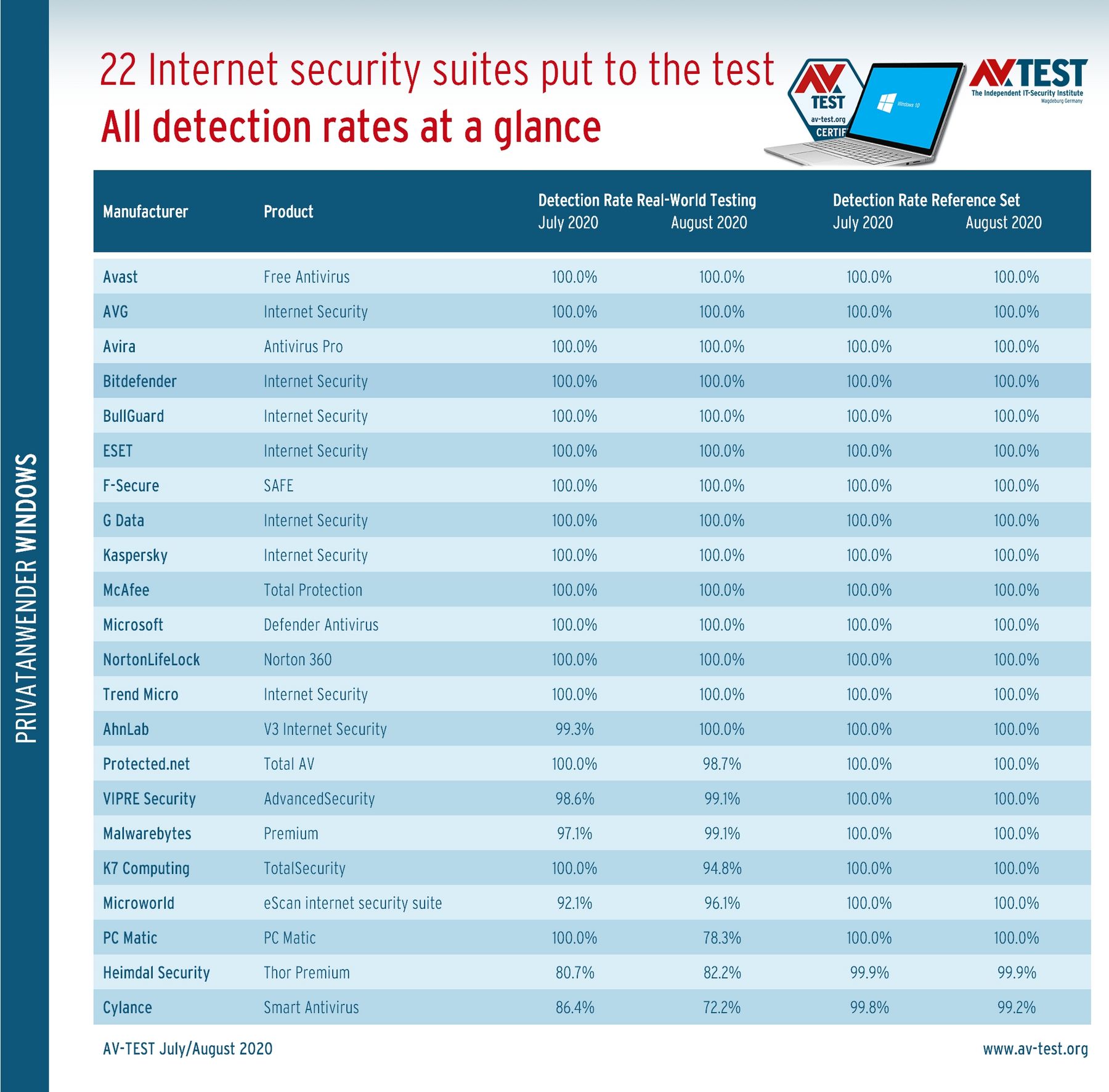 Anti-malware protection: Each tester was required to discover, quarantine, or remove over 14,000 malware samples. 8 products managed to recognize 100% of test threats.

In recent years, the increased load on the system from antivirus products has become a constant source of irritation for testers. During testing, the lab performs many of the standard operations on the reference device: downloading websites, downloading files, installing and running software, and copying data.

The time it takes to complete these steps is set as a guideline for systems with installed products. If any excessive delay is registered, the product will lose points.

In the latest rounds of testing, laboratory experts have recorded a noticeable improvement in performance. This time, 21 out of 22 tested products either did not slow down the system at all or had a minor impact on performance. As a result, 17 products received the maximum 6 points in this test, and another 4 – 5.5 points each. Malwarebytes alone received only 4.5 points due to the excessive load on the system.

During this test, laboratory experts visited 500 secure websites, installed and run more than 60 popular programs with installed protection. In addition, each test taker has to scan over 1 million harmless files. Ideally, the product will not generate a single false positive.

This result guarantees trouble-free use in the future.

Based on the test results, 15 out of 22 products made a small number of false positives and received a maximum of 6 points. Solutions from Bitdefender, BullGuard, Heimdal Security and Microworld made mistakes a little more often and received 5.5 points.

Malwarebytes and PC Matic products marked a relatively large number of safe programs as malware and got only 4.5 points. Cylance has the worst score – only 3.5 points due to frequent false positives.

It is noteworthy that even the built-in antivirus Windows 10 (Microsoft Defender) received a maximum of 18 points as a result of testing. On the other hand, if you look at the testing history for the last year, then this result can be considered the exception rather than the rule.

Many antiviruses not only provide reliable protection, but also offer useful additional tools. When comparing solutions with equal scores, it is helpful to look at their functional set.

And also check out our antivirus comparisons and check what bugs contains your chosen product.