Reviews on some of the best antivirus software on the market. Find the excellent protection for your PC here.
Best Antivirus
CompareComparing...
2866
Сlarity and Trust – We take pride in being the site where you can feel free to express your opinion and leave feedback. Whenever you click on the websites of products reviewed by us, we participate in the revenue sharing and get commissions that help us maintain our project. Read more about how we work. 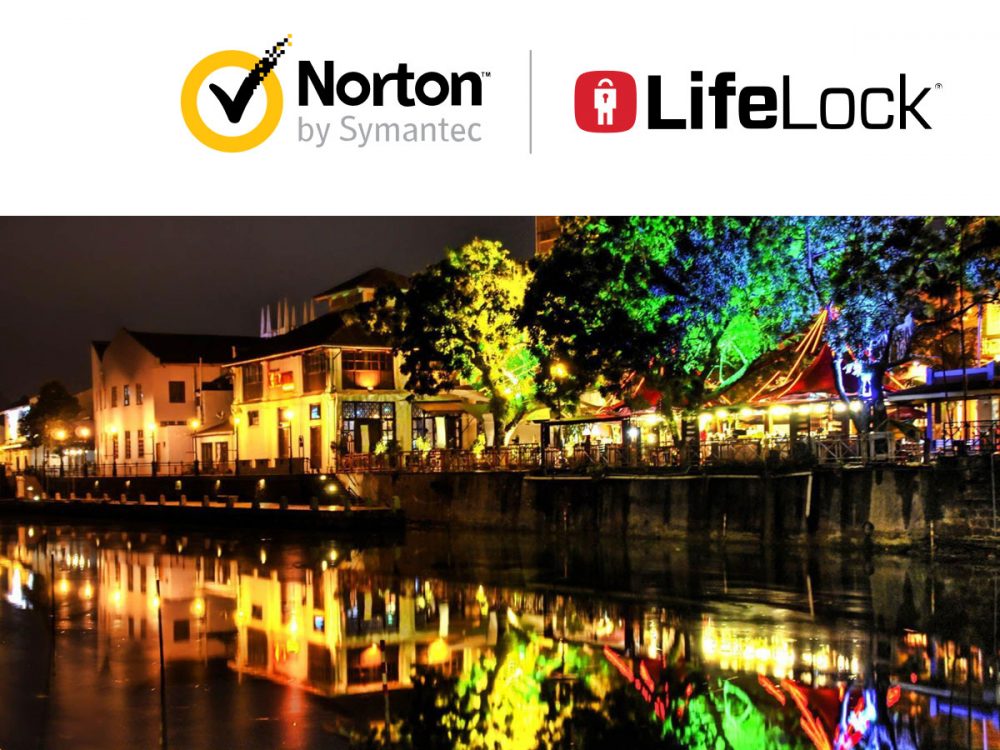 Norton provides malware protection without slowing performance of the system during the scans.
Overview
Operating System

One of the most significant Norton’s options -- automatic “Cloud Backup” when the computer is saving files in non-using mode.

Secure VPN (Virtual Private Network) with a strict “No Log” policy. VPN is constructed to protect all the business-financial data, passwords, e-keys, and personal information that can be stolen via the internet. Also, VPN will be useful when a PC is connected to public Wi-Fi networks.

Sometimes, Norton doesn’t block detected viruses. One user may have to double-check that every detected threat was blocked and moved to the quarantine folder.

A minor complaint about Norton’s user interface is that there’s no desktop application for Norton Password Manager -- only a browser-based web app. But this isn’t going to bother many people.

“Parental Control” available in 360 Deluxe and 360 Premium only.

Norton delivers reliant malware protection without slowing the system's performance during the scans.

Regarding the scanning speed, it takes over 1 hour to undertake a full scan for a hard disk. A quick scan consumes 2-3 minutes. You can accelerate the scanning by using the allowlist. To enable this tool - a user might add trustworthy files to it and use saved scanning time only for the potentially harmful files. So, scanning time can be decreased to 20 minutes only.

8.4
Our Rating
7.8
User Rating
3 ratings
You have rated this 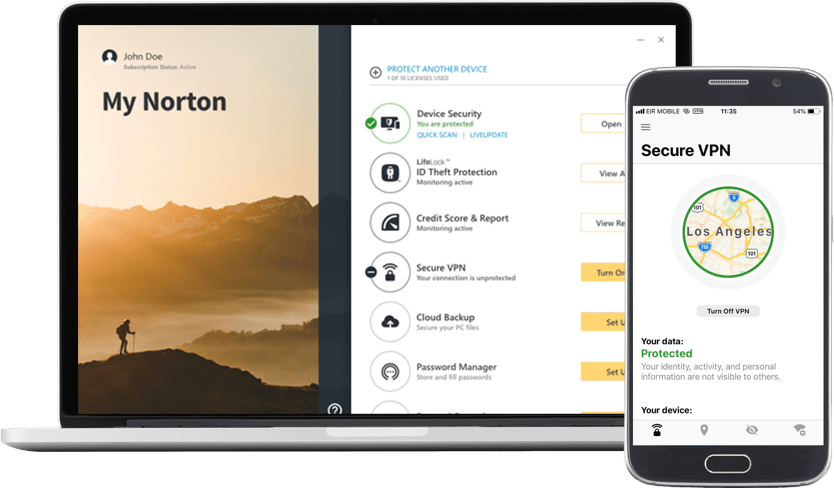 Nowadays Norton is constantly presented in well-performing cybersecurity products basket. In accordance with the real-world protection test results produced by AV-comparatives, Norton Antivirus identified and seized near 99.3% of cyber-threats.

Norton 360 new edition got a rank of maximum 18 points as a result of the AV-Test Lab. The score for such a basic component like performance, and usability was 6. It is notable, that Norton, typically scored 5.5 points for usability.

Briefly, Norton delivers trustful malware protection without slowing the performance of the system during the scans. If malware tries to access a website, Norton will block the entry attempt indicating a warning on a slash screen.

When a user tries to download malware, Norton also will pop-up a public warning window and pause the downloading process. Simultaneously, detected viruses are placed in the quarantine folder to prevent computer contamination. In every case, when a contaminated file is caught, Norton Antivirus would inform the user about the threat that was going to install itself on the computer. Norton offers 2 interfaces: ” My Norton” and “Classic”. These options are projected to retain and keep long-standing customers in a comfortable, as experts consider the old interface, but the second option is projected for new customers.

When the program is opened, four relevant security options are offered by Norton: Security, Backup, Performance, and Identity. For some additional information, click “More Norton” is available. A reminder tells when the subscription is soon to expire and delivers the link to extend the subscription.

Norton 360 installation process is straightforward and not complicated: 1 Mb setup file that transforms into a 175 Mb installation and type the activation code. The program will offer the user the option to participate in data collection — Community Watch. But you can skip this option.

To check system in one-click – to start a quick scan –it consumes nearly 7-8 minutes. Green colored plate will inform, that Norton 360 delivered optimal protection and system in safety. If Norton 360 found a malware user will see a red X mark. It means system data is under threat. Also, you can launch Silent Mode.

Like many other antivirus software, Norton has three levels of protection. Signature matching — the software is connected to the known malware packages database. The protection validity is strengthened by multifaced analysis – it permanently monitors software behavior and checks new programs code in order to detect unknown malware before it contaminates the PC devices.

Each version of Norton antivirus has a ransomware protection component. This unit enables users to purchase online without fear of credit card credential theft by malware. Additionally, you will protect the user’s personal data stored on the PC against non-planned encryption.

All Norton plans are supplied with an anti-phishing protection package. The software identifies suspicious links or files early before they infect or contaminate the user’s PC computer and make any hazard for personal information.

Norton offers an option to exclude specific folders or file types from scans in order to save time. Automated tasks can also be scheduled, for example, via the clearing browser history or backing up big unnecessary files.

Norton 360 is shaped with a 4 key security features:

Norton technology labeled as “Sonar”–Symantec Online Network for Advanced Response. SONAR exploits a line of methods to deliver an anti-malware shield for a computer. Besides the usual signature-based antivirus techniques, SONAR can detect unknown and emerging types of malware, so-called “zero-day” threats.

Norton’s “Cloud Backup” delivers reliant storage for important files and data. For many reasons, cloud backup is handy — one is able to easily reach files on the phone, home computer, work PC, or any location you can access the internet. Also, Norton offers cloud storage –to protect against ransomware.

During Cloud Backup installing, Norton lets the user choose what kind of files to back up, where, and how to back up them. In addition, Norton cloud backup provides an option to save data by file-type, for example, pictures, office documents, emails, etc. Furthermore, you can schedule backups weekly or monthly basis. One of the most significant “Cloud Backup” option is the “automatic backup” when computer saving files in non-using mode. Some experts suppose Norton’s Cloud Backup to be more advanced and comfortable than Dropbox or Google Drive because Norton automatically makes data savings.

VPN is constructed to protect all the business-financial data, passwords, e-keys, and long line of personal information that you can steal via the internet. VPN is in active usage when a PC is connected to public Wi-Fi networks. Norton Secure VPN uses a rigid “no log” protocols. So, Norton doesn’t record users’ identity or browsing history. As a result, VPN keeps one’s activity privately hidden.
Furthermore, the internet traffic circulating via the Secure VPN is highly encrypted. Notably, Norton Secure VPN can hide the user’s true locations via connecting to secure servers all around the world. More, it provides an opportunity for customers to use unlimited data.

To compare: a dozen antivirus companies make a volume restrictions on VPNs. For instance Kaspersky — 300 MB per day, Bitdefender — 200 MB per day, and Panda — 150 MB per day.

Norton Password Manager works as a browser app, and after installation, the password strongness criteria testing creates a Password Vault. It has a moderately simple interface. The “Safety Dashboard” toolbar delivers an overall password score strength. With login credentials, you can place payment details, addresses, and notes in the Password Vault. 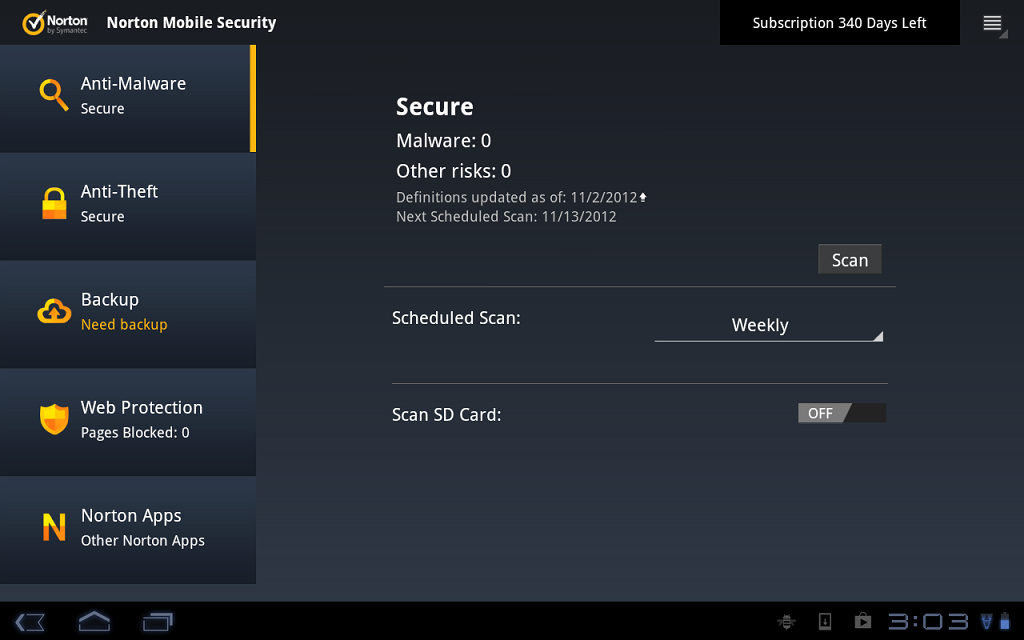 The following features are also available on mobile, but via separate apps: 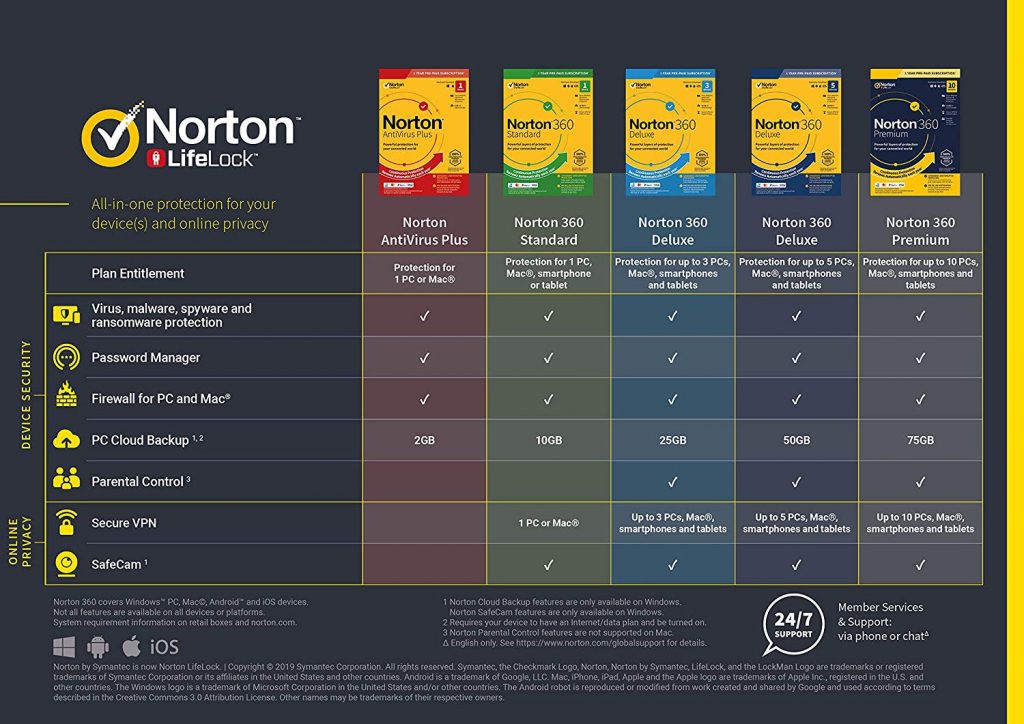 Norton Antivirus Plus — is a simple package focused on protection 1 PC or Mac from all kinds of ransom-malware. Flexible firewall, password manager  and anti-phishing instruments are package components. Additionally, the package supplies 2GB of Cloud Backup.

Norton 360 Standard — is the more advanced plan for one device and is joint with iOS and Android. This option delivers more Cloud Storage — 10 GB, webcam protection, VPN tool, Dark Web monitoring to save personal data. The cost of the Norton 360 Standard – $39.99 for the year with a $40 discount.

Norton 360 Deluxe — is a version of the Standard package for five devices with 50 GB of storage and parental control. A focused Web Portal helps to navigate it easily. Norton 360 Deluxe – $49.99 for a year with $60 off.

If one never applied for Norton products before, he can take advantage of Norton coupons for new customers and purchase its high-quality antivirus with a significant discont. For instance, the discount on the Norton 360 Standard — 1 device for the 1-year is $50 off – $29.99 instead of $79.99.

likethis
What's your reaction?
Love It
100%
Like It
0%
Want It
0%
Had It
0%
Hated It
0%
Posted In
Best Antivirus
Tags
Norton
Norton
About The Author

Emma Davis
I'm a writer and content manager (a short time ago completed a bachelor's degree in Marketing from the Gustavus Adolphus College). For now, I have a deep drive to study cybersecurity.
You might also like
Norton
Read More

Bitdefender vs Norton – What is Better in 2022?
Comments
Leave a response 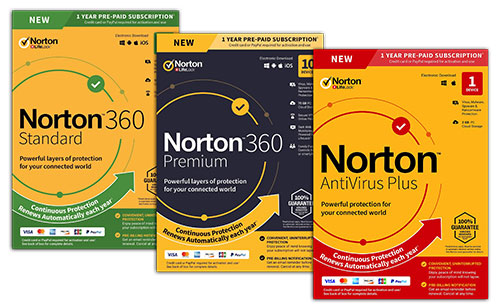